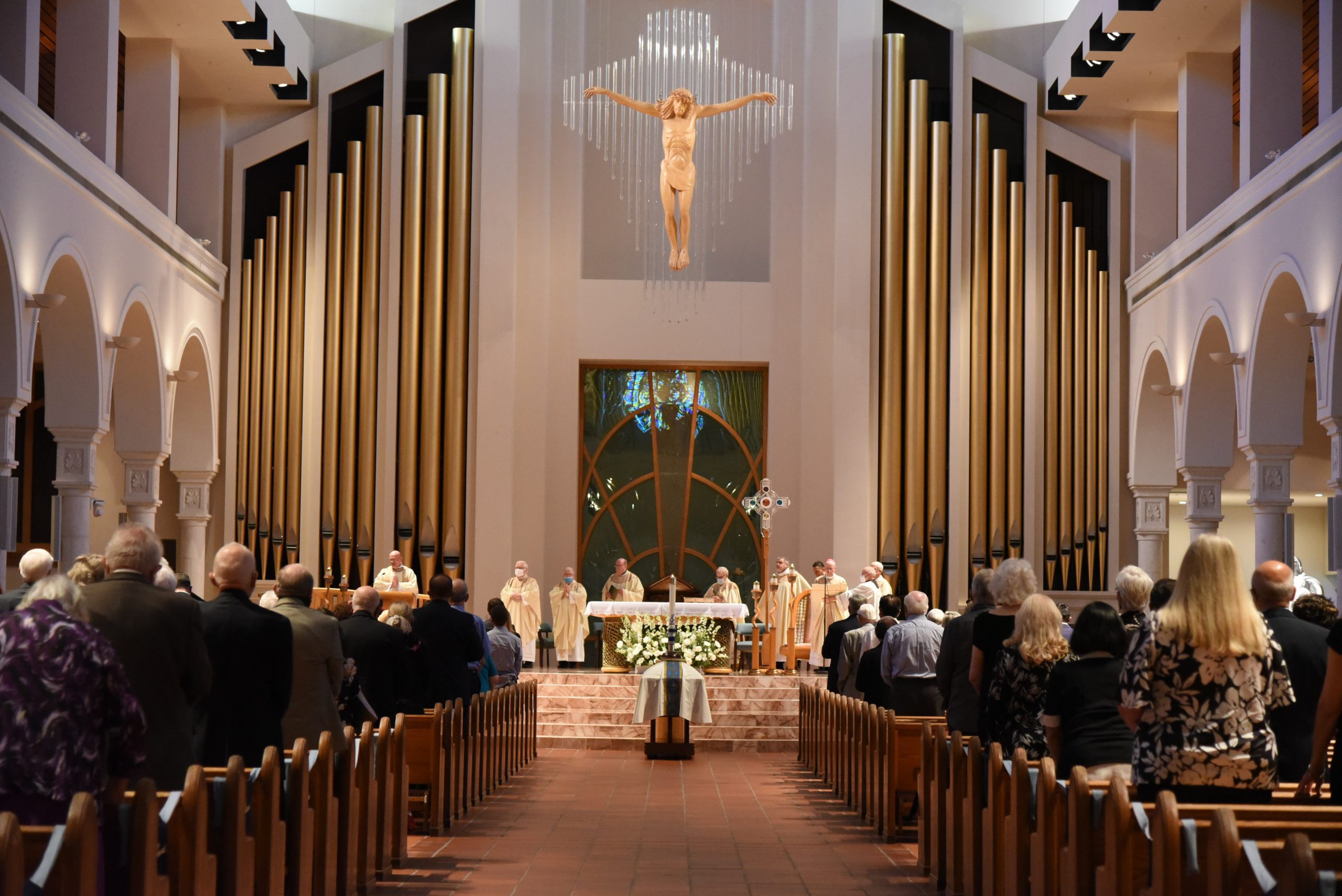 ORLANDO | Hundreds of faithful from all over the Diocese of Orlando came to pay homage to Monsignor Fachtna Joseph Harte, June 27, rector of the Basilica of the National Shrine of Mary, Queen of the Universe for 25 years. Msgr. Harte died May 30 after a long illness.

Msgr. Harte is largely responsible for the basilica’s building and growth. The beloved Irish priest knew he wanted to serve the church at just 9 years old. His love for God and His children was evident from the dozens of photographs and letters, set on easels in the basilica’s narthex ahead of the Funeral Mass.

Father Robert Kurber, on monsignor’s 90th birthday in February 2020, wrote, “I marvel at what God has accomplished through you—the conception, the development and fulfillment of a totally new and exciting ministry. Only God knows how many people have been served and touched by your vision – thousands every week.”

After becoming pastor of Holy Family Parish in Orlando in 1975, the parish became the center for a tourism ministry, leading to his appointment as Director of Ministry to Tourists in 1980. Widower J. Bruce Riley, recalled the early days of Msgr. Harte’s ministry. Riley wrote to then Father Harte (1979), 18 years after Riley’s original visit to the area, the year after his wife died – leaving him with two young daughters, ages 8 and 9. Seeking to brighten his children’s life with a positive memory, Riley took his children to Disney World and stayed at the Polynesian Hotel. The family participated in Mass, in the small “Hawaiian Luau chapel” in the pavilion of the hotel, where Monsignor Harte ministered to tourists.

Riley wrote, “I remember being impressed that you inquired as to what parts of the country and what parts of the world people travelled from, that they all worshipped our Lord in a common way. Our faith had brought us together in that make-shift chapel.” He noted how he and his daughters were still in shock at the loss of a beloved wife and mother. “I wanted them to know that God was watching over us and things were going to be okay,” Riley wrote. Monsignor Harte left such an impression that the family contributed to the building and growth of the shrine from their home in Massachusetts, in gratitude for his witness of love and kindness. Riley added, “Please know that you had an influence in strengthening my faith many years ago.”

It was with that fondness that friend, fellow seminarian and priest, Father John McMullan remembered the monsignor. From their days as Trappist monks, when they joined the Bag Pipe Band in the hopes of getting extra food, to the many miracles they believed were granted by Our Lady to those who came to the Shrine, the two shared a lifetime of memories over their 65 year friendship.

Father McMullan chuckled as he recounted when Harte told mutual friend, Father Tom Dooley, his idea of building a large church to serve tourists, shortly after his appointment to the tourist ministry. Father Dooley told the monsignor, “Joe Harte, you are absolutely crazy!” Father McMullan continued, “Well, as we look around this magnificent church built to honor God’s Mother and her Divine Son, and knowing the story of thousands of visitors from all around the world who came here to worship God, and receive Holy Communion, and the thousands of people who have celebrated the Sacrament of Reconciliation here, I would say that Joe Harte was not so crazy after all.”

Under the direction of Bishop Thomas Grady, Monsignor Harte established a church in the theme park area, which became the Shrine of Mary, Queen of the Universe. Eventually the diocesan shrine achieved the designations of National Shrine and then Minor Basilica. Monsignor Harte was appointed its first rector in 1992, until his retirement in 2007.

That same year, Apostolic Nuncio, Archbishop Celestino Migliore visited with Monsignor Harte and later wrote, “I must say I was very much impressed and edified by your abiding pastoral zeal, and the ambiance of spirituality that permeates the Shrine.” He later addressed benefactors of the Shrine at an event thanking them for their support. He told them, “In spite of the passage of time, however, one thing that – I’m delighted to say – has not changed is Msgr. Harte’s serene, fatherly regard for his people, his indefatigable and farsighted zeal…”

True to those words, Father McMullan noted how Monsignor Harte “tripled and even quadrupled his prayer life” toward the end of his life. The two celebrated Mass the evening before his passing. Father McMullan shared that a few years ago, Monsignor Harte simply asked him to tell everyone at his funeral, “I love God. I love the Blessed Mother and I love all the people I have known. That’s ALL!”

Speaking about his Uncle Fachtna, nephew James Fitzgerald shared fond memories and closed with his uncle’s familiar prayer after Mass. “May the best day of your past, be the worst day of your future. Until we meet again, may God keep you all in the palm of His hand, and may His Blessed Mother watch over you.”